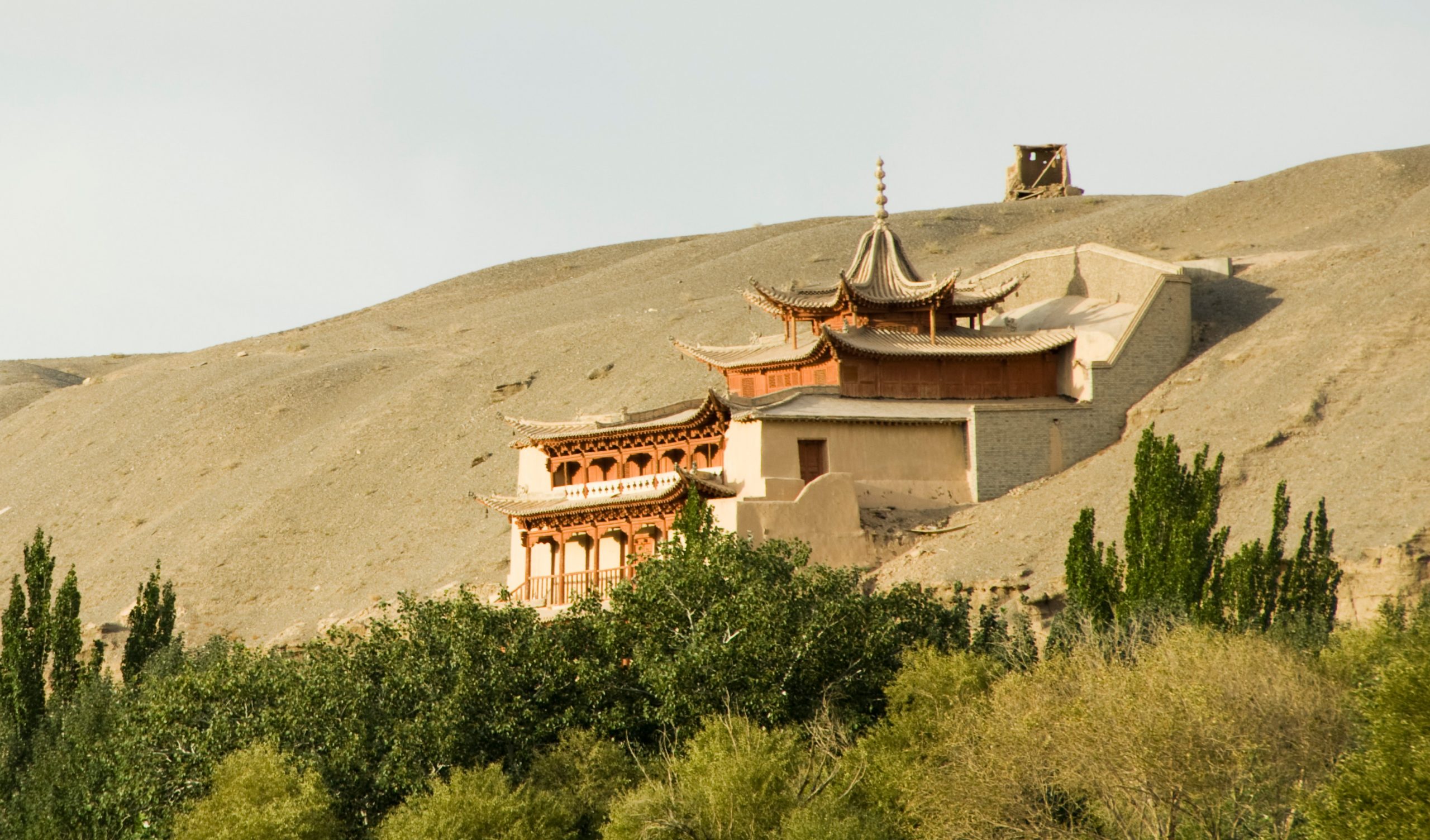 The Mogao Caves in China

“Dunhuang in western China has been called a great art museum in the desert. It is a marvelous storehouse of Buddhist artworks spanning a thousand years.”

The Mogao Caves are a unique world treasure located near Dunhuang, a rest stop along the Silk Road in China. They are located at an ancient crossroads of trade and religious, cultural and intellectual influences.

The hundreds of decorated cave temples in Mogao are famous for the statues and wall paintings that span a thousand years of Buddhist art—from the 4th to the 14th centuries. They served to support Buddhist practice and as visual aids for the illiterate to learn Buddhist teachings and stories. The Lotus Sutra is portrayed in many of the caves.

The fame of the Lotus Sutra spread throughout Asia as travelers experienced the glory of the Dunhuang murals, manuscripts and sculptures.

“If good men and good women embrace, read, recite, expound, and copy the Lotus Sutra … these persons will be looked up to and honored by all the world.”

—The Lotus Sutra and Its Opening and Closing Sutras, p. 200

Over the centuries, individuals, local women’s groups, wealthy families and heads of state created temple caves with the goal of honoring and preserving the Buddhist teachings. Donors who financed the production of caves are pictured in this room. The efforts of those who worked behind the scenes, offering time and support, made sure that Buddhism was preserved and widely propagated for thousands of years. Their deep faith and devotion made it possible for generations of Buddhist believers to overcome their challenges and bring hope to their communities.

Mahayana—A Buddhism of the People

Two distinct Buddhist traditions emerged after Shakyamuni died: Theravada and Mahayana. Theravada was a monastic group that focused on doctrine and rules of discipline, while living in monasteries removed from society. The Mahayana group focused on propagating Buddhism in the cities, among the people.

The early monastic tradition of Theravada Buddhism was suspicious of musical or theatrical performances. Mahayana practitioners, on the other hand, used the arts to make Buddhist teachings easier to understand. They employed music, dance, poetry, stories, painting, sculpture and other art forms to transmit Buddhism along the Silk Road. People were naturally drawn to Buddhism’s profound philosophy, and it integrated and inspired various cultures as it spread.

A pipa is a four-stringed Chinese musical instrument with a pear-shaped wooden body and varying number of frets. The pipa was probably introduced to China from Central Asia and/or India in the 2nd century CE.

Dancing while playing a pipa behind the back was extremely difficult. The performance was widely admired, often depicted in paintings and sculpture. The Sanskrit term “teacher of the Law” can be read as “one who memorizes and recites the scriptures.” In some scriptures, the “teacher of the Law” is described as a dancer or musician.

Some of the earliest depictions of the Lotus Sutra are found at the Mogao Caves. This painting (late T’ang dynasty, 862–867) depicts twenty-four of the twenty-eight chapters of the sutra.

The Lotus Sutra is a cosmic drama told in three sections, also known as the three assemblies in two places. The first section, spanning the first ten chapters, takes place on Eagle Peak; the second covers chapters 11–22 in a ceremony suspended in the air; and the remaining chapters take place back on Eagle Peak. In the first section, Shakyamuni refutes his previous teachings, characterizing them as preparation for the ultimate truth, the Lotus Sutra. The second section reveals Shakyamuni’s infinite life span and ends with Shakyamuni entrusting the propagation of the Lotus Sutra to the Bodhisattvas of the Earth. The last section describes the various benefits of propagating the Lotus Sutra.