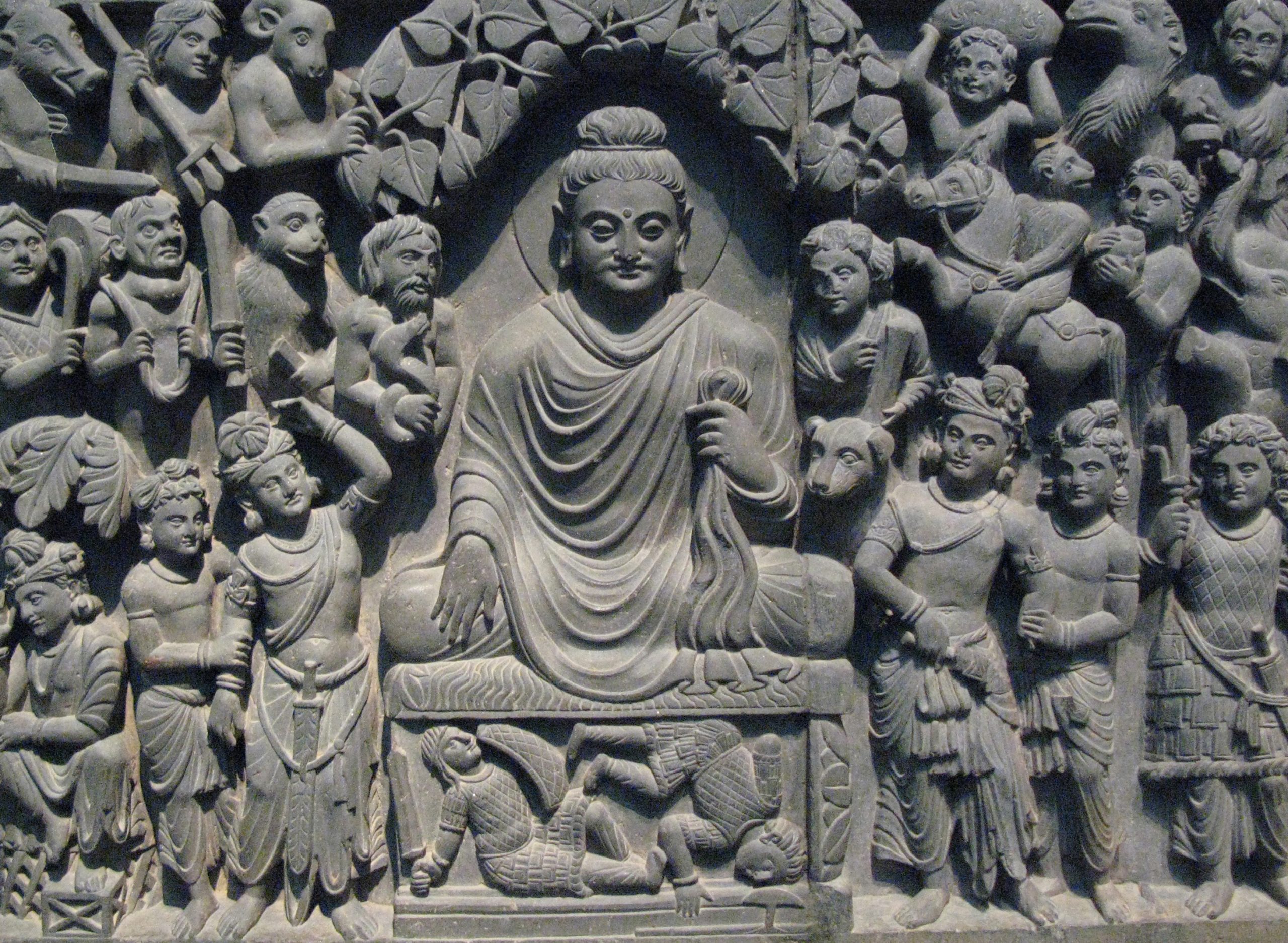 Shakyamuni and the Lotus Sutra

A brief history of Shakyamuni Buddha and the spread of his teachings.

Shakyamuni Buddha—Life as a Prince

As a prince, Shakyamuni grew up living in luxury … He had a different palace at his disposal for each season of the year, and attendants with parasols were always on hand to shield his head from the sun’s burning rays … He lived in complete ease and comfort.

Shakyamuni Buddha was born in northeastern India around 500 BCE, the eldest son of a king. As a young man, he became aware of the impermanence and sufferings of life—birth, aging, sickness and death. He left the luxuries of the palace in pursuit of answers to life’s perplexing questions and to seek a way to relieve people of their suffering.

The force that impelled [Shakyamuni] to take up the religious life, and indeed became the point of departure for the entire Buddhist religion, was an ardent desire to transcend the sufferings inherent in human life.

Shakyamuni tried meditation, then asceticism—subjecting his body to painful austerities—to free himself of desires. Mastering these practices left him unsatisfied, so he rejected them to seek a new, deeper path to the truth on his own. He struggled for years to conquer his own delusions about the true nature of life. In his thirties, while sitting under a Bodhi tree, Shakyamuni awakened to the fundamental truth that enables all people to overcome their sufferings. He then resolved to dedicate his life to sharing this truth with others.

Dedication to All People

The power of Shakyamuni’s eloquence and sincerity made it possible for Buddhism to gain wide acceptance among the people of his time, deeply penetrating their hearts and minds.

Shakyamuni traveled far and wide to teach and encourage others to transform their lives and help others do the same. His disciples included people from all walks of life: from kings, warriors and merchants, to members of the lowest, untouchable class. Shakyamuni welcomed women into the Buddhist Order, treating monks, nuns, and lay men and women as equals. In the context of India’s rigid caste system, Shakyamuni’s indifference to social standing was unique. His sincere dedication sparked a people’s movement, centered on valuing and promoting the dignity of all life.

Shakyamuni taught for many years before revealing his ultimate teaching, the Lotus Sutra.

“The compilation of the twenty-eight-chapter Lotus Sutra … was made possible by [Shakyamuni’s] disciples who shared with one another “This is what I heard,” out of their wish, based on the same state of life as the Buddha, to save all people.”

Immediately after Shakyamuni’s death, a council of monks gathered to put his teachings into definitive order. These teachings came to be known as sutras, which usually begin with the words, “This is what I heard.” This opening line indicates the teachings as they received them from the Buddha and their commitment to sharing them with others. Over time, common people took the initiative to spread Buddhism.

King Milinda and Nagasena—
Dialogue Between East and West

“The source of both men’s satisfaction lay in putting aside personal feelings and prejudices and engaging in an earnest search for the truth.”

King Milinda (Indian name of Greco-Bactrian king Menander) ruled over the region that is now Afghanistan, Pakistan and northern India in the latter half of the 2nd century BCE. For some time, the king sought out eminent monks and religious leaders to debate philosophy and resolve his doubts about religious matters. Unsatisfied, he summoned Nagasena, a young and brilliant Buddhist monk renowned for his skill in discourse.

The two men engaged in earnest dialogue for three days. The king upheld Hellenistic thought and the monk presented Buddhist wisdom from India. The Questions of King Milinda, an extant Buddhist scripture of that dialogue, is an important record of the exchange of Greek and Indian thought.

Impressed by Nagasena’s wisdom, the king converted to Buddhism and erected a monastery for the Buddhist community. Later in life, he relinquished the throne to his son and devoted his life to Buddhism. His patronage allowed Buddhism to mix and flourish with Greek culture.

All men are my children, and as I wish all welfare and happiness in this world and the next for my own children, so do I wish it for all men.

King Ashoka reigned over much of India from 279–232 BCE. Once known as Ashoka the Tyrant, after seeing the mass suffering he had caused he repented. He renounced conquest by force in favor of rule by Buddhist principles and is now honored as one of the most benevolent rulers of all time.

Ashoka established healthcare facilities, promoted religious tolerance, renounced animal sacrifice, had roads built and wells dug. He established many other projects to benefit people throughout his vast kingdom. Across India, Ashoka erected many stupas (sacred Buddhist towers and domes) and other monuments inscribed with Buddhist ideals. He also sent envoys to other countries, including Egypt, Macedonia and Syria, renouncing war and promoting friendly relations.

King Ashoka had Buddhist monuments built throughout India and abroad. This reproduction is the top of the famed pillar at Sarnath, site of the Buddha’s first sermon. It features four lions standing back to back, roaring as they spread the Buddha’s teachings. On the drum, four animals represent stages in the Buddha’s life: the elephant represents his birth; the bull, his privileged life as a prince; the horse, his renouncing the throne to seek the way; and the lion, his attainment of Buddhahood. The whole sits on a bell-shaped lotus.