In times of challenge, we must return to the foundation of our Buddhist practice through studying and living Nichiren Daishonin’s writings. And it is through patiently fostering youth that we can assure the future. These were the core messages that SGI Vice President Yoshiki Tanigawa underscored at leaders meetings held in Chicago (May 15), Dallas (May 17) and Santa Monica, California (May 21).

Mr. Tanigawa had traveled to the U.S. to attend the 2022 commencement ceremony for the University of Minnesota’s Hubert H. Humphrey School of Public Affairs, where on May 14, he accepted an honorary Doctor of Humane Letters on Ikeda Sensei’s behalf.

In a message to the leaders meetings, Sensei said that he accepted the honorary doctorate together with all the members, his treasured friends. “In our efforts for kosen-rufu, everyone is a protagonist. We strive so that everyone becomes happy,” Sensei said. “As you harmoniously and courageously advance with the pride that you and I—all of us—are noble entities of the Mystic Law, please continue chanting daimoku like a roaring lion for oneself and others.”

—Prepared by the World Tribune staff

Calling Forth the Heart of a Lion King

Good evening, everyone. Today, I’d like to first talk about how we can approach the study of Buddhism.

In cultivating our abilities as leaders who are advancing kosen-rufu, deepening our understanding of Buddhist study is of utmost importance.

However, simply reading Nichiren Daishonin’s writings, called the Gosho, doesn’t lead to mastering Buddhist study. Only through taking action and making efforts in faith can we truly engrave them in our lives.

In The Youth and the Writings of Nichiren Daishonin, Ikeda Sensei says:

The Soka Gakkai’s Buddhist study is study for the sake of practice. The purpose of reading the Gosho and studying the principles of Buddhism is so that we can encourage the person in front of us and bring forth the wisdom to overcome problems facing us, and so that we can manifest the life state of Buddhahood and together open the door to great victory. If we seriously study The Writings of Nichiren Daishonin, chant and take action to inspire others and help them win, the “wisdom of the truth that functions in accordance with changing circumstances”[1]

In addition, Sensei, on many occasions, has shared essential guidance from his mentor, second Soka Gakkai President Josei Toda. I’d like to focus today on three such guidances to affirm with all of you how we can best apply and live the Gosho:

1) My mentor, Josei Toda, said, “You should read each line of the Gosho with a deep personal conviction in its truth.” There is a difference between understanding something intellectually and understanding it on the level of faith.

If you apply the Daishonin’s words to your own life, the time is certain to come when you can say, “Ah, that’s what he’s talking about!” and you will fully grasp his meaning. (Aug. 3, 2012, World Tribune, p. 3)

2) President Toda said: “Don’t just try to understand Nichiren’s writings with your mind. What’s important is to feel and be moved by the Daishonin’s spirit. If you do this, you’ll be able to remember what you learned in previous existences because you all have definitely learned his teachings before. If you try to lecture on the Gosho without first being moved by it, you won’t succeed. The key is to study Nichiren’s writings in earnest as if you are training to become a master swordsman.” (Tentative translation from Ikeda Sensei’s Aug. 24, 2007, address)

By connecting with the life state of Nichiren Daishonin as we exert ourselves for kosen-rufu, we develop and expand our own life state. We can call forth the heart of a lion king—a spirit as vast as the sky and as deep as the sea. (Jan. 15, 2016, World Tribune, p. 3)

In each of these three guidances, we find vital lessons in studying the Gosho. Let’s reconfirm what President Toda says in the guidances above:

Objectively looking at the Osaka Campaign of 1956,[2] it seemed like an impossible challenge. But the Kansai members made the impossible possible. And the driving force behind that dramatic victory was Sensei starting each day of the campaign with vigorous morning gongyo, followed by his lectures on the Gosho, into which he poured his entire being.

“If you apply the Daishonin’s words to your own life, the time is certain to come when you can say, ‘Ah, that’s what he’s talking about!’”

I believe it’s essential to read the writings again and again until they’re engraved in your lives, and you can recall them by heart.

[Mr. Tanigawa then recited in English and from memory the following passage from “The Opening of the Eyes”: “Although I and my disciples may encounter various difficulties, if we do not harbor doubts in our hearts, we will as a matter of course attain Buddhahood. Do not have doubts simply because heaven does not lend you protection. Do not be discouraged because you do not enjoy an easy and secure existence in this life. This is what I have taught my disciples morning and evening, and yet they begin to harbor doubts and abandon their faith.

“Foolish men are likely to forget the promises they have made when the crucial moment comes” (WND-1, 283).

Today, too, I know you all have goals toward expanding our kosen-rufu movement and are grappling with various challenges. To win in these, let’s study the Gosho and open a path forward to a clear and decisive victory. This is Buddhist study for the sake of practice. I wanted to reaffirm and refresh with all of you today this fundamental spirit behind studying and applying the Gosho.

The key to raising youth is to meet with them one-to-one.

In The New Human Revolution, vol. 12, Sensei emphasizes the great importance of raising youth. He says:

“No matter how dynamic and solid an organization appears to be, if its youth are not growing, it will eventually stagnate. Fostering young people is crucial to the achievement of kosen-rufu.” (revised edition, p. 30)

And regarding the question, “What is the key to raising young people?” he explains:

“We must trust and respect youth. It is wrong to treat them as subordinates simply because they haven’t been practicing for very long, or because they’re younger. We need to be ﬁrmly determined to support them in becoming even more capable than ourselves, empowering them to fully develop their potential. …

“Furthermore, in fostering youth we need to entrust them with speciﬁc assignments and give them opportunities to take the lead. … If we don’t provide youth with opportunities to challenge themselves, they will never grow. …

“At the same time, if we simply tell the youth to do this or that without guiding them, it’s as if we’re waiting for them to fail. First, we ourselves have to take action and set an example, and then we can give them the responsibility, encouraging them all the while.” (NHR-12, revised edition, 30–31)

Sensei also once gave guidance, offering concrete ways in which we can engage with youth:

“The key to raising younger members is to meet with them one-to-one, talk with them and take action together with them. Having a meal or a cup of coffee with them once in a while can serve as opportunities to encourage them.” (July 1, 2005, World Tribune, p. 2)

In addition, it isn’t easy to try to raise many people at once. Instead, Sensei teaches that we can, for example, focus on fostering a core group of 10 or so youth. Then, each person in that core group can foster more youth. He also teaches that when youth decide to set a goal to expand their ranks, we must do everything we can to ensure that this goal is achieved.

In March 1990, I was appointed the Soka Gakkai’s national young men’s leader. It was suggested to me by the then-Soka Gakkai president, Einosuke Akiya, that, with the appointment of new leadership, we should set a goal to gather 2 million youth. 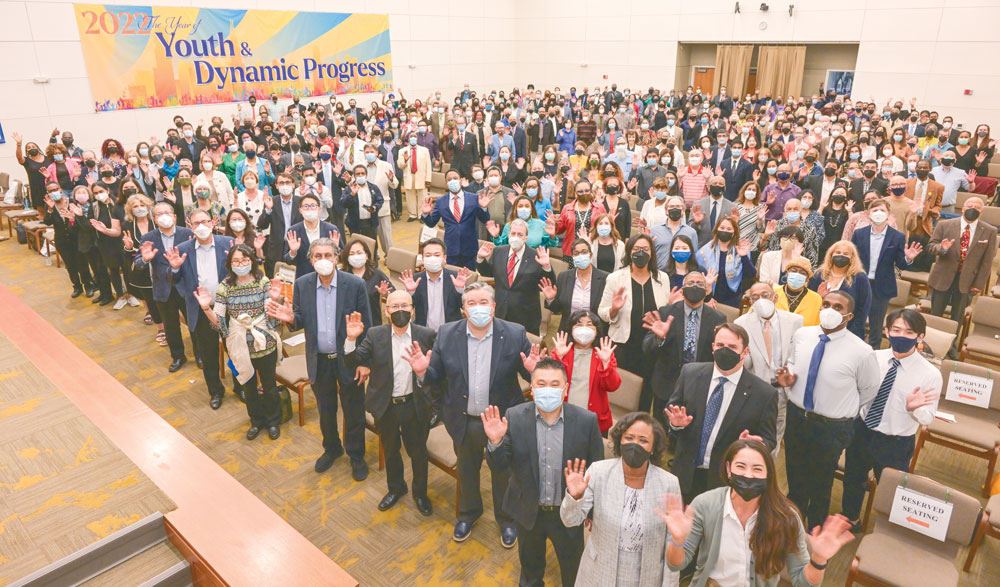 Unity—Chicago Zone representative leaders gather for a meeting with Mr. Tanigawa, May 15, 2022. Photo by Seikyo Press.

The following month Sensei attended a national youth leaders meeting, where I spoke for the first time as the new national young men’s leader. At the podium, I declared: “We received a proposal from Sensei that the youth gather 2 million members. We will fight toward this goal!”

Right then and there, Sensei said, “I never said such a thing.”

While still stunned by Sensei’s comment, he strictly added: “It is not a true battle if you’re doing something because someone else told you to. A true battle is one that you ‘own,’ in which you yourself decide on a goal and take full responsibility to achieve it through your own diligent efforts.”

I quickly responded, saying: “I’m sorry to have missed that point. We youth will take full responsibility to gather 2 million young people!”

Sensei fired back: “Are you sure you can accomplish it?”

And he went on to say: “Every single thing I said to my mentor, Toda Sensei, I accomplished. There wasn’t one thing I left undone. How about you? Can you really accomplish this without a doubt?”

At that time, we were far from having 2 million youth members. To achieve the goal of gathering 2 million was indeed a formidable challenge.

However, because I had already expressed my determination to accomplish this goal, I wasn’t going to back away from it.

A true battle is one in which the disciples set their own goals and take full responsibility to achieve them.

So, I steeled my resolve at that moment and declared: “Yes, we can do it! I’ll make sure we achieve this goal!”

And, together with all the youth around the country, we put our all into reaching out to youth and making efforts toward this goal.

Sensei has taught us that a true battle is one in which the disciples set their own goals and take full responsibility to achieve them. It’s not just about setting or having a goal. It’s about disciples vowing to the mentor to achieve a goal and making all possible efforts to realize it.

This, for me, was an unforgettable exchange with Sensei.

Sensei once explained that youth naturally attract more youth, bringing a whirlwind of excitement and creating a great flow of capable people. This is what kosen-rufu is about.

Future victory is guaranteed anywhere youth are energized. In that sense, I’d like to ask you to pour all your energy into raising the youth, the next generation. Please, first and foremost, unite four-divisionally to make this a great tradition so that you may construct a bright future filled with victories for kosen-rufu in America and throughout the world.

I am sending my heartiest prayers for your health and victory and the powerful advancement of kosen-rufu. With this, I conclude my words for tonight. Thank you very much!