My younger brother, who passed away in 2016, was far more adventurous than I and likely the only one on the planet who could have gotten 22-year-old me to attend a Soka Gakkai activity. I associated anything organized or religious with conformity, the loss of individual expression. His enthusiasm surprised me. Like me, he was a freethinker and shared many of my own skepticisms about religious institutions. Unlike me, however, he saw that my suffering stemmed from a fear deeper even than that of conformity—namely, its opposite: the fear of being myself.

Being bullied in elementary school had taught me the untrue lessons that I was safest when least expressive and to withdraw from people who are most expressive. A Soka Gakkai meeting, brimming with confident, outspoken people, was the perfect setting to trigger my fears of condemnation and my instinct to shut down. My brother’s persistent gentleness and abundant prayer for my happiness, however, slowly won me over.

I began to drive to his place for gongyo, morning and evening. At first, I found the practice arduous, but I began to sense for myself what my brother had been talking about—the confidence and rejuvenation that chanting gave rise to. Still, I remained reluctant to receive the Gohonzon, citing my usual worry about conformity. Then came some unsolicited advice from my brother’s girlfriend. 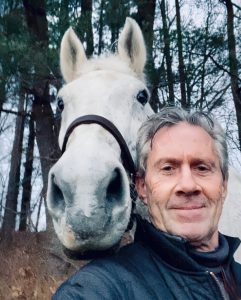 What she meant was that committed practice with this community of Buddhists was not going to make me someone I wasn’t. Of course, over the ensuing years the practice succeeded in changing me profoundly, but only in making me a wiser, more courageous and compassionate version of myself—a truer version—than I could have imagined.

When I first began to get involved, my focus was on gaining benefits. My idea of benefit was getting a girlfriend, something I longed for but had no confidence to pursue. My young men’s leaders urged me to share Buddhism, to encourage others to do the same and to support activities behind the scenes. They also pushed me to go all-out for what I had been too afraid to pursue. They were telling me, in essence: Life is short! Let’s live boldly with Ikeda Sensei!

By striving in my practice, I began to recognize and appreciate the unique contributions I could make to others. Because I struggled to feel grounded in large groups, I found that for others who felt the same way, I could gently encourage them in a way that they could hear. Taking on leadership was an opportunity for me to be a version of myself that could inspire action in a way that was natural to me. Supporting others in their practice, a noticeable new joy and energy entered my life, paving the way for the benefits I was chanting for (I got a girlfriend!).

And yet, I continued to struggle with confidence. It was not until the end of my first marriage, in the late ‘80s, that I realized that I still bottled up large pieces of myself, fearful of what would happen if I expressed them. In counseling sessions, and during lots of chanting, I came to accept that I had been moving for years through a thick cloud of depression that, while not debilitating, hindered every aspect of my life. I also had the exciting realization that acting, something I had enjoyed casually until then, could potentially be a powerful way to unpack the full range of emotions I had been so long afraid to express. Hesitantly, but doggedly, I began to pursue a career in acting, growing bolder with time.

Indeed, with all its challenges, acting proved powerfully freeing. Why? Because, in acting, I was freed to express the extreme universals of human nature; to be angry, mean, sarcastic and even, one time, naked! Every time I stepped into a new character was a challenge and victory in boldness. Laughing and crying with an audience—for all intents and purposes, a room of strangers—was deeply empowering. In the end, none of us are really such strangers—we all understand pain and love, greed and rapture; all are moved by bravery and kindness.

Recently, I moved from New York to my hometown of Rockport, Massachusetts to fulfill yet another new role as my mother’s caretaker. I chant a lot for her happiness and do my best each day to encourage her and bring joy into her life and my own. I can sense that, without challenging myself daily in front of the Gohonzon, I would have no way to draw forth the patience and strength that she deserves of me. Fortuitously, many movies are filmed near to where we live, and I recently acted in an Oscar-nominated film. I credit the SGI for who I am today—someone who is able to live boldly and encourage others to do the same.

Q: What advice would you give the youth?

Erik Parillo: I’d say: Try to understand who Ikeda Sensei is. When I was beginning my practice, I didn’t really get the idea of having a mentor in life. But I kept seeking. Sensei has challenged me to take risks, to be bold, to become a stronger, kinder, more courageous person. A good mentor teaches you how to live, how to be happy. Stick with Sensei and discover for yourself the value you can create with a mentor like him.